Dennis Niemeyer Inducted into the WNC Ag Hall of Fame 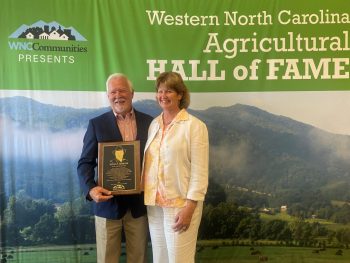 This annual event recognizes stewards of our Western North Carolina agribusiness sector and honors the visionaries and leaders of the agriculture industry. At a time when Western North Carolina is seeking new methods of sustainability, WNC Communities is proud to recognize those who have made significant contributions to one of our state’s most important sources of revenue.

Dennis Niemeyer, the 10th of 11 children, grew up on a family farm in Ohio where he learned about hard work and discipline and gained an appreciation for the natural world.  He went on to graduate from The Ohio State University in 1978. Dennis worked as a field nursery manager in Carlisle, OH and a Sales Manager for Rhone Poulenc before owning We-Du Nurseries in Marion, NC from 1994-2002. Dennis is currently the Southeast US Sales Manager for Bailey Nurseries and owns Magnolia Ridge Farm in Saluda, NC.

During his career, Dennis has spent many years advocating for and promoting the horticulture industry. While serving as President, as well as Chair, of the Legislative Committee of the NC Green Industry Council, he brought issues relevant to the industry before legislators in Raleigh and Washington, DC. “As a direct result of his leadership, North Carolina’s green industry is economically stronger and its needs are understood in government agencies regulating areas such as water resources, water quality, and plant health,” said Debbie Hamrick, Director of Specialty Crops with North Carolina Farm Bureau Federation.

Dennis has also worked to protect and propagate native plants in North Carolina. As Chair of the NC Plant Conservation Program Scientific Committee, Dennis focused on endangered, threatened, and special concern species. His work with his own native plant nursery and the International Plant Propagators Society has ensured nurseries have access to a greater selection of native plants. Dennis also helped establish a management model for the Cullowhee Native Plant Conference, which was used to form similar conferences in Alabama, Pennsylvania, and Texas.

He has received awards and accolades including being inducted into the Order of the Long Leaf Pine Society; Ambassador of Agriculture, NCDA&CS; D.S. Copeland Award and Lifetime Achievement Award, NC Nursery & Landscape Association; and the Fellow Award, International Plant Propagators Society.

Dennis also served on numerous committees and boards including the NC Plant Conservation Program Scientific Committee, President and Chair of the Legislative and Executive Committees for the NC Green Industry Council, President and Organizing/Governance Board Member for the Cullowhee Native Plant Conference, Advocacy Board Member for the American Nursery & Landscape Association (AmericanHort).

“Dennis is a pillar of the agricultural community who has provided selfless leadership to enhance the prosperity, economy, and quality of life of those here in WNC,” says Dr. Thomas Ranney, Professor of Horticulture, NCSU. His role as advocate, ambassador, and business leader in the green industry has earned him the honor of being inducted into the 2022 WNC Agricultural Hall of Fame.

Also inducted this year was Dr. Greg Hoyt, a pioneer in no-till production systems. WNC Communities is honored to award stellar leaders in agriculture with a plaque on the prestigious WNC Agricultural Hall of Fame Wall located in the Davis Event Center on the grounds of the WNC Agricultural Center in Fletcher, NC.