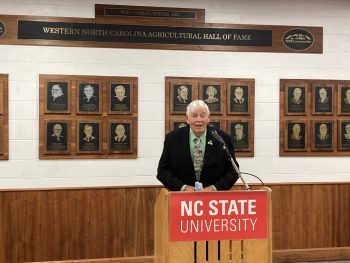 WNC Communities held the 30th Annual Western North Carolina Agricultural Hall of Fame Induction Ceremony at the Mountain Horticulture Crops Research and Extension Center in Mills River. Terry William Rogers, a fifth-generation farmer and agricultural leader from Haywood County, was inducted during a modified awards presentation. Due to current restrictions regarding public gatherings, the scaled-down ceremony was livestreamed and a limited number of attendees were present to substitute for the normal luncheon and gathering of peers, guests and friends.  The ceremony can be viewed HERE.

This annual event recognizes stewards of our western North Carolina agribusiness sector and honors the visionaries and leaders of the agriculture industry. At a time when western North Carolina is seeking to strengthen our economic sustainability, WNC Communities is proud to recognize those who have made significant contributions to one of our state’s greatest source of revenue. 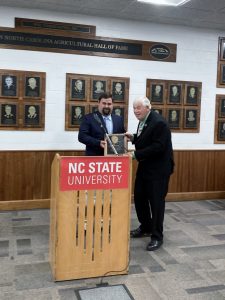 farm. He attended Crabtree Iron Duff School and Western Carolina University with early skill development in carpentry, sawmilling, and teaching the trade that led him to a career in home construction for many years. His career continued as a full-time farmer, retiring in 2018, allowing others continue the farming under a lease.

His early years as a youth included participation in 4H and the FFA, where he became competitive in showing livestock, judging cattle, demonstrating farm practices and leading teams to compete in state events. Later in his life, he continued as an advocate for agriculture and an inspiration for young people in agriculture, assisting them in attending agricultural events and competitions, as well as providing college scholarships.

As a farmer he raised tobacco and beef cattle with a focus on Black Angus. He always stayed on the front end of new agricultural issues and farming practices. He participated in workshops, conferences, field days as well as leading farm tours all across the nation to bring new ideas back to the farm. Terry has worked closely with the Mountain Research Station and the North Carolina Cooperative Extension Service and was a pioneer for no-till farming.

“Terry has devoted his life to being an advocate for agriculture. He has been an important part of shaping modern agriculture in western North Carolina through pioneering new methods or marketing as well as preparing the next generation of farmers,” said longtime friend and colleague Kyle Miller.