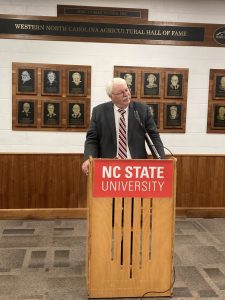 WNC Communities held the 30th Western North Carolina Agricultural Hall of Fame Induction Ceremony at the Mountain Horticulture Crops Research and Extension Center in Mills River. North Carolina Commissioner of Agriculture and Consumer Services, Steve Troxler, was inducted during a modified awards presentation. Due to current restrictions regarding public gatherings, the scaled-down ceremony was livestreamed and a limited number of attendees were present to substitute for the normal luncheon and gathering of peers, guests and friends. The ceremony can be viewed HERE.

This annual event recognizes stewards of our western North Carolina agribusiness sector and honors the visionaries and leaders of the agriculture industry. At a time when western North Carolina is seeking to strengthen our economic sustainability, WNC Communities is proud to recognize those who have made significant contributions to one of our state’s greatest source of revenue. 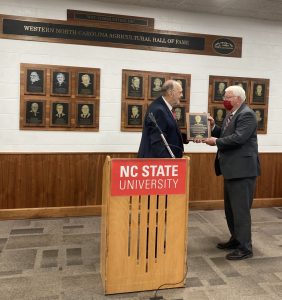 In his third term in office, Commissioner Troxler is recognized as a leader with outstanding performance in heading up the state’s agricultural economy.  A strong leader with a highly qualified staff of professionals, his dedicated work has a brought a high degree of success to the North Carolina Department of Agriculture and Consumer Services.

Steve Troxler was raised in Guilford County and has spent his entire career in agriculture as founder, owner and operator of Troxler Farms. Over the years, the family owned farm has produced tobacco, wheat, vegetables and soybeans.

His leadership in the agriculture communities in western North Carolina is demonstrated by the significant work he has done with the WNC Ag Center, the N.C. Mountain State Fair, the WNC Farmers Market, the Mountain Research Station, the Division of Soil and Water Conservation, Farmland Preservation and his work with row crop farmers and the apple industry. He also has shown dedication to forestry with his important work in the DuPont State Forest and Headwaters State Forest.

Through his strong relationship with the N.C. General Assembly, N.C. Tobacco Trust Fund Commission, the Golden LEAF Foundation, the Farmland Preservation Fund, the N.C. Rural Center, and the Appalachian Regional Commission, the Commissioner is responsible for bringing millions of dollars into the mountain region for agricultural programs.

His confidence in WNC Communities to carry out agricultural initiatives has resulted in many local successes which have brought significant benefit to the agricultural community and the economic wellbeing of the folks in the mountain region. These include, but are not limited to, the WNC Regional Livestock Center, the WNC Brewers Grain program, the Hemlock Restoration Initiative and  the DuPont State Forest Educational and Visitor Center.

Commissioner Troxler has been recognized with numerous awards. He was named a 2016 Tobacco Great and received a 2015 Distinguished Alumni Award, both from the N.C. State University College of Agriculture and Life Sciences and a 2015 Friend of the River Award from the Land of Sky Regional Council. His support of agritourism and several major tourism projects in the state earned him the 2014 Public Service Award from the N.C. Travel Industry Association. Other honors include the 2013 Forest Conservationist of the Year.

Commissioner Troxler’s experience in leadership include being a past president of the National Association of State Departments of Agriculture, former chairman of NASDA’s Food Regulation and Nutrition Committee, for which he received the 2015 NASDA award for his commitment to food safety. He served as president of the Southern Association of State Departments of Agriculture, as well as serving on the boards of the N.C. Foundation for Soil and Water Conservation, the Rural Economic Development Center and the  N.C. Biotechnology Center. He is a member the N.C. Tobacco Research Commission and the Southern United States Trade Association.

Also inducted this year was Terry Rogers of Haywood County. WNC Communities is honored to award stellar leaders in agriculture with a plaque on the prestigious WNC Agricultural Hall of Fame Wall located in the Mountain Horticulture Crops Research & Extension Center in Mills River, NC